A cycle superhighway in Denmark’s Capital Region is a sure winner: On average a 23 % increase in cyclists, a single trip length of 11 km and 14 % of new cyclists who are former car drivers. The Danish Cycle Superhighway Collaboration between 27 municipalities and the Capital Region of Denmark releases its first cycle account, showing the major beneficial effects of developing bicycle infrastructures.

Since the first cycle superhighway opened in the Capital Region of Denmark in 2012, the Cycle Superhighway Collaboration has been busy expanding the route network and monitoring its effects. This year marks the 10th anniversary of the collaboration, with the results of what are now eight existing routes having been collected in the cycle superhighways first Bicycle Account.

“Copenhagen initiated the Cycle Superhighway Collaboration after a report showed major potential in decreasing urban congestion by increasing the number of bike commuters entering and leaving Copenhagen. But in order to do that, we need to collaborate with the other municipalities in the region to improve the conditions for cycling. Copenhagen might be the world’s most bicycle-friendly city, but that doesn’t affect our ambition to continue to improve and expand – and maybe even one day be a part of the world’s most bicycle-friendly region,” says Ninna Hedeager Olsen, Mayor of Technical and Environmental Affairs at the City of Copenhagen.

The total planned network of cycle superhighways consists of 45 routes. Currently, eight of the routes exist and eight more are in the making and will be launched in the coming years. The effects are clear. On average, upgrading cycle routes to cycle superhighways has resulted in a 23 % increase in cyclists, with 14% of the new cyclists previously having chosen a car. Furthermore, the average trip length on the cycle superhighways is 11 km.

“Commuting by bike is not just for people living in the cities – bike commuting is for everyone, everywhere. That’s why suburban and rural municipalities also need to pay attention to the bike as a mode of transport. Nearly half of all Danish commuters have 10 km or less each way – shorter than the average trip length on the cycle superhighways. Considering this and the impressive results of the eight existing cycle superhighways, we see a great potential in investing in cycle infrastructure,” says Tomas Breddam, Mayor of Roskilde, one of the latest municipalities to join the collaboration.

The cycle superhighway bicycle account shows not only the positive direct effects of the routes, but also the indirect effects of the total network, and of commuting by bike in general. A socio-economic analysis of the cycle superhighway network estimates the project resulting in a socio-economic surplus of €765 million, making the project one of Denmark’s most profitable infrastructure investments. The health benefits alone make up for €616 million of the socio-economic surplus.

“The continuous increase in physical inactivity is not only a growing health problem – it is also a very costly one. That is yet another reason for us to keep on improving conditions for bike commuters – both the existing and potential ones. We know that the main motivation for bike commuters, even on such long distances as 11 km each way, is the opportunity to turn their time spent on transportation into time spent on exercising and clearing their minds. In that perspective, biking to work is very time efficient and it works,” says Karsten Längerich, Mayor of Allerød.

The Cycle Superhighway Collaboration has been selected as one of the 100 city projects making the case for climate action in 2019 by the Cities100 Report. Already, cycling in the Capital Region saves the region what equals to 15.000 Danes’ annual CO2 emission. 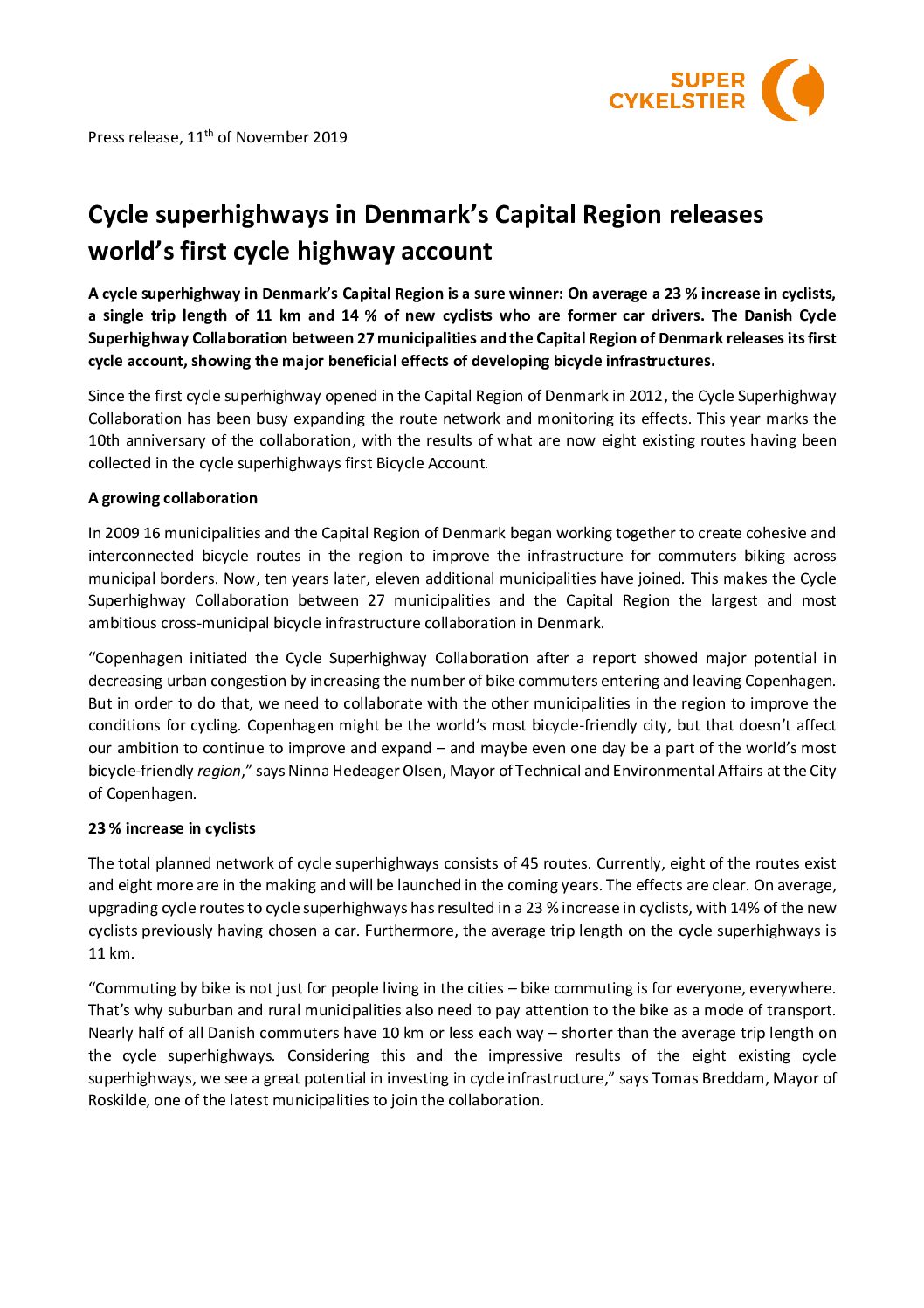 A cycle superhighway in Denmark’s Capital Region is a sure winner: On average a 23 % increase in cyclists, a single trip length of 11 km and 14 % of new cyclists who are former car drivers.